On April 10, China unveiled a plan on promoting the transformation of enterprises toward digitalization and intelligence by further expanding the application of cloud and data technologies. The plan, which was jointly released by the National Development and Reform Commission (NDRC) and the Cyberspace Administration of China, attached the same importance to digital twins as big data, AI and 5G. One chapter was especially devoted to digital twin innovation projects, in which the government suggested to engage all parties to participate in the digital twin solutions.

The COVID-19 pandemic has brought digital transformation to the forefront and creates demand for simulation capacities. New infrastructure construction, digital twins and industrial internet have been the subject of lively public debates for months. In the wave of new infrastructure construction, digital twins come under the spotlight as local governments rolled out relevant policies and many experts and industrial authorities draw the public’s attention to digital twins.

Digital twin technology/platform in the industrial internet can be used as one of the carriers of industrial software.

According to academician Ni, industrial internet in the manufacturing powers had all been buttressed by industrial software over the decades, such as ANSYS of the United States, Dassault of France and SIEMENS 4.0 of Germany. Among them, the German industrial 4.0 emphasized the physical integration of information systems, reflecting the effect of the industrial software while US GE’s Predix highlighted the twin digital technology. He believed that the ever-expanding digital twins effectively integrated the physical space and the virtual space with the support of modeling and simulation. He said that based on traditional industries and information technologies, application integration and technological innovation should be achieved in industrial interconnection to build a new industrial system. 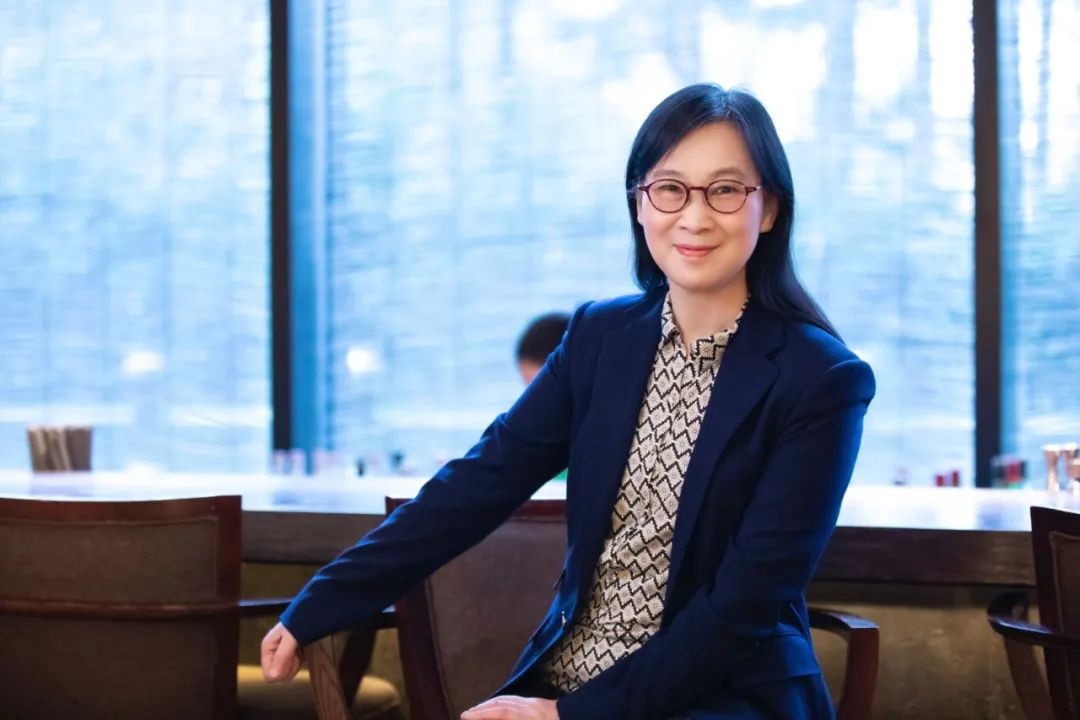 Chen Chunhua: the real world and the digital world are not separated from each other, but are integrated through digital technologies.

On April 9, Professor Chunhua Chen shared her idea on how to become effective managers and accelerate the digital transformation of enterprises in a cloud dialogue hosted by the China Enterprise Reform and Development Society. “The fundamental challenge of digitalization is to reconstruct the real world into a digital one. One of the essential features of digitalization is the integration of the real world and its digital counterpart. I quote one phrase-digital twins, in other words, the real world and the digital world are not separated from each other, but are integrated through digital technology. In the first half of the internet, what we discussed most was the impact of the virtual economy on the real economy. I do not fully agree with this statement, because the virtual economy doesn’t necessarily undermine the real economy. While we enter into the second half of the internet, the virtual and the real must be integrated as online and offline are inextricable from each other. This is the essential characteristic of digitalization. It is not that the virtual economy disrupts the real economy. It is up to us to integrate the virtual with the real and create new values. ”she said. 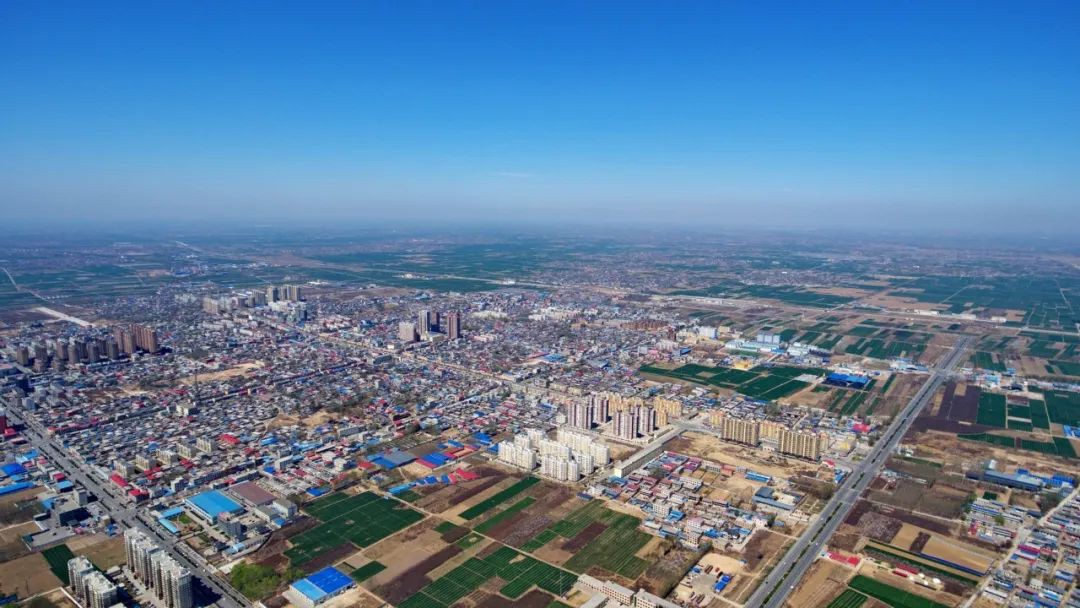 Xiong’An: synchronize the planning and construction of a digital Xiong’An and a real one to create a world-leading digital twin city with deep learning capabilities.

In terms of urban intelligence management, the Outline of Xiong’an Planning suggested to synchronize the planning and construction of a digital Xiong’An and a real one, properly deploy intelligent infrastructure in advance and establish a big data asset management system to create a world-leading digital city with deep learning capabilities. Liu Duo, the president of the China Academy of Information and Communications Technology, pointed out that Xiong’an New Area would be a green city with a more humane, convenient and intelligent transportation system. The sensory systems deployed in the physical infrastructure during construction were able to collect the city’s holographic data information, on which a digital twin city was reconstructed to interact with the physical one. 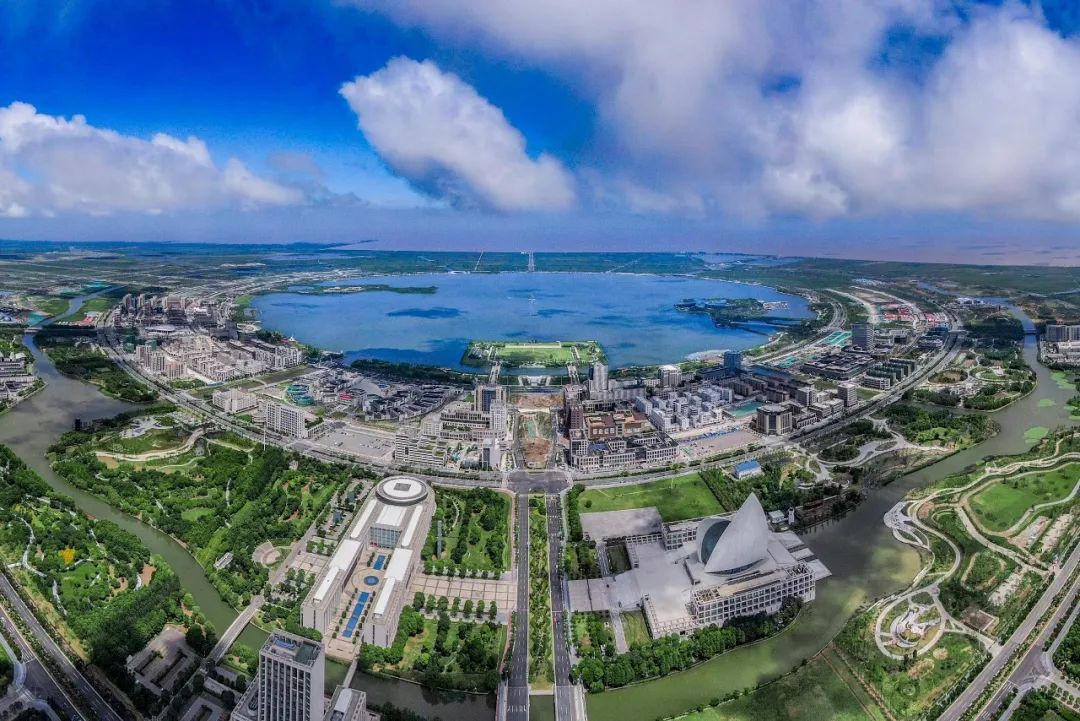 Shanghai: to build a digital twin city base in the stage of optimization and upgrading.

Shanghai municipality would promote the construction of 5G networks, optical fiber broadband, IoT and industrial internet applications, and speed up on building international data hubs and edge computing networks in the Lingang New Area of the Shanghai Free Trade Zone, according to telecommunications infrastructure guidelines for the area throughout 2025 released on April 20.

In order to enhance the status of Lingang New Area in Shanghai’s urban communications network, the plan proposed to deploy intelligent sensing devices with specific functions in the construction of the IoT infrastructure, to provide rudimentary public services. The total number of completed IoT terminals shall not be no less than 40,000 and the integrated rods no less than 7,000 while during the optimization and upgrading phase of building the digital twin city base, the numbers are elevated to 100,000, and 15,000 respectively.

On April 18, the Chongqing Municipal Economic and Information Commission issued a notice that enterprises affected by the COVID-19 outbreak can make supplementary applications for the resource pool of industrial internet and intelligent manufacturing service providers in Chongqing in 2020. 12 categories were announced, including new-generation ICT integration service providers, which referred to enterprises providing the integrated service such as big data, cloud computing, virtual reality, digital twins, biometrics, Internet of Things, etc. and those equipped with the capabilities of constructing and implementing application scenarios. Chongqing municipality would actively engage the selected companies in Chongqing’s smart manufacturing and cloud service platform, etc., support them in terms of demand, pilot demonstration, publicity and forum display, and encourage cooperation among them and districts, counties and industrial parks, to create benchmark cases and regional demonstration. 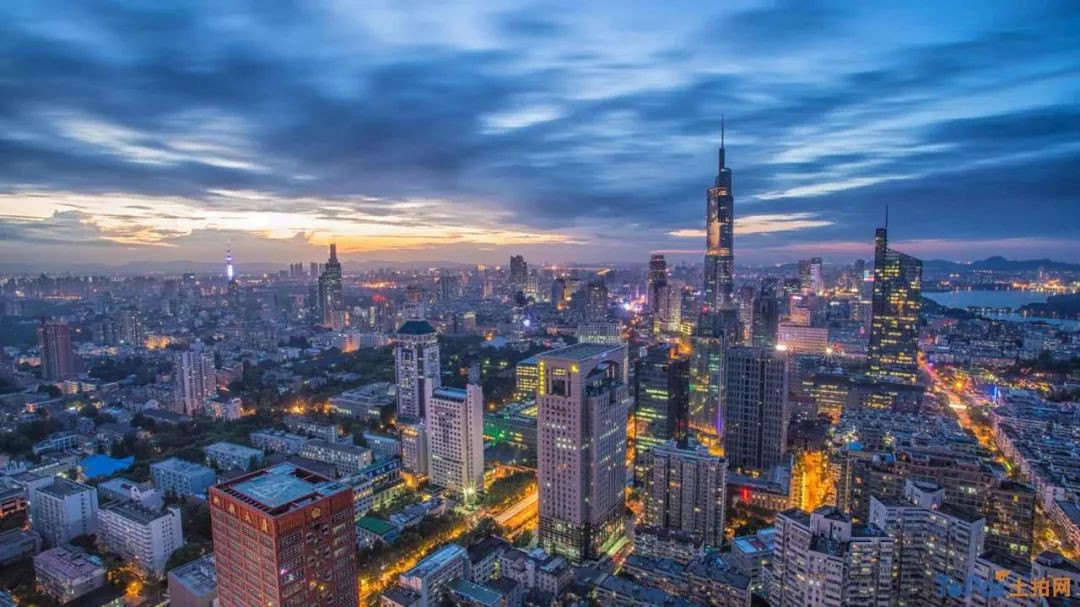 Nanjing Jiangbei New Area aspires to construct itself as the first digital twin city in China by 2025, to push the urban development to a higher level of intelligence, according to a district plan on smart city construction.

The plan revealed that Jiangbei New Area strived to digitalize all the elements of the people, objects and events in the 386 square kilometers in the area, map them into a high-precision digital twin city information model and make relevant predictions. The digitalization and virtualization of city elements, real-time urban operation and coordinated smart governance enabled by digital twin technology would help optimize urban running, improve social management and modernize economic development in the Jiangbei New Area. 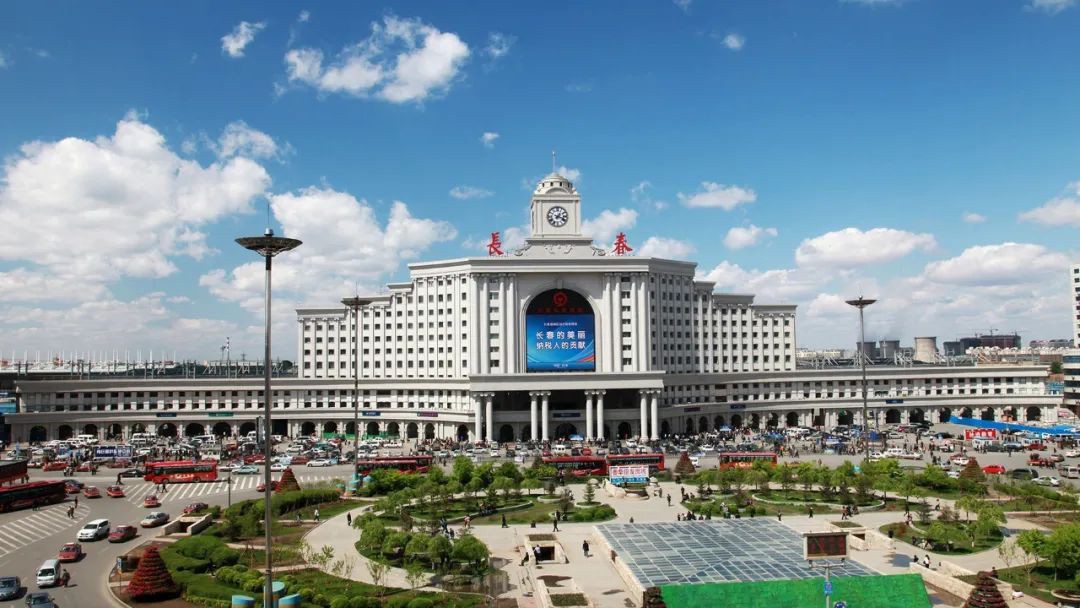 On April 20, Jilin Province rolled out 7–6–1 project plan on new infrastructure, which referred to stepping up the construction of 7 new infrastructure of 5G, UHV, intercity high-speed railway and intercity rail transit, charging piles for new energy vehicles, big data centers, artificial intelligence and industrial internet, upgrading 6 networks of intelligent information, roads, water, power grids, oil and gas, and municipal infrastructure, and strengthening one shortboard of social undertakings. In terms of industrial internet, the province suggested accelerating the fostering of new industrial ecology, expand the scale of the digital economy, establish research institutes, and put forward a systematic approach for the development of the manufacturing industry.

One after another, local governments come up with policies to guide digital twin city construction and the implementation of supporting measures are also gaining momentum.

In February 2020, Shanghai issued Several Opinions on Further Speeding up the Construction of Smart Cities to explore the digital twin city construction, digitalized simulation of all elements of urban ecological resources, and the feasibility of building a digital base for intelligent management;

In 2019, Guiyang proposed to build a digital twin city, starting from the governance of micro ecological systems such as super-large community and street blocks;

Zhejiang Province has released a pilot implementation plan for future community management, in which nine scenarios were formulated and the requirements for building a realistic digital twin community were put forward;

On April 15, Xinhuanet published a commentary on new infrastructure promoting the integration of the virtual economy and the real economy, in which the author stated that “on the one hand, industrial data enriches data resources. The digitalization of manufacturing industry enables the enterprise to collect colossal industrial data from facilities, systems and software, depicts a digital twin of the manufacturing industry in the virtual world, forms more abundant and complex data resources than the consumer sector, and become the source of the digital economy. On the other hand, massive circulation of data brings about innovative values. The integration of the virtual economy and the real one opens up physical data fragmentation and breaks down virtual data barriers, achieving unhindered flow of the data and generating new values, new models and new industry.”

One article on the intergenerational leap of the new infrastructure in the 16th issue of Outlook in 2020 pointed out that “ new infrastructure, in the narrow sense, is about digital technologies and intelligent infrastructure of modern energies, advanced materials and green manufacturing such as 5G, data center, artificial intelligence, industrial internet, light source, square kilometer array radio telescope (SKA), new energy vehicle charging facilities. The national high-performance digital twin and knowledge infrastructure provide a colossal and open foundation platform for economic and social development and ensure unobstructed flow of the materials, energies and information as well as a more secure chain of supply, industry, innovation, values, talents, capital, polices and information, reducing resource misallocation, elevating utilization efficiency, and improving productivity and competitiveness, which are conducive to a better life for the public “ 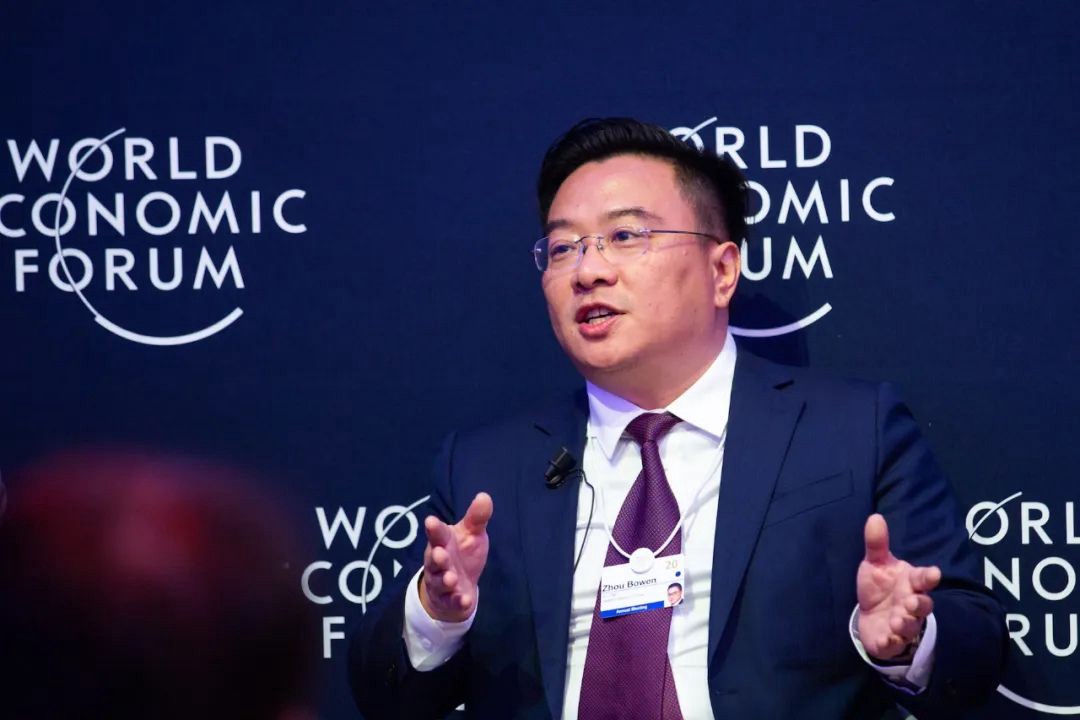 Dr.Zhou BowenZhou Bowen of JD: the goal of new infrastructure construction is to create a twin digital world that matches our physical world.

Dr. Zhou Bowen, vice president of JD.com, chair of JD technology committee and president of JD cloud & AI, once said in an interview that “the goal of new infrastructure construction is to create a twin digital world that matches our physical world, in which we can move the bits at our will and increase the motion rate of atoms to an extraordinary level”. 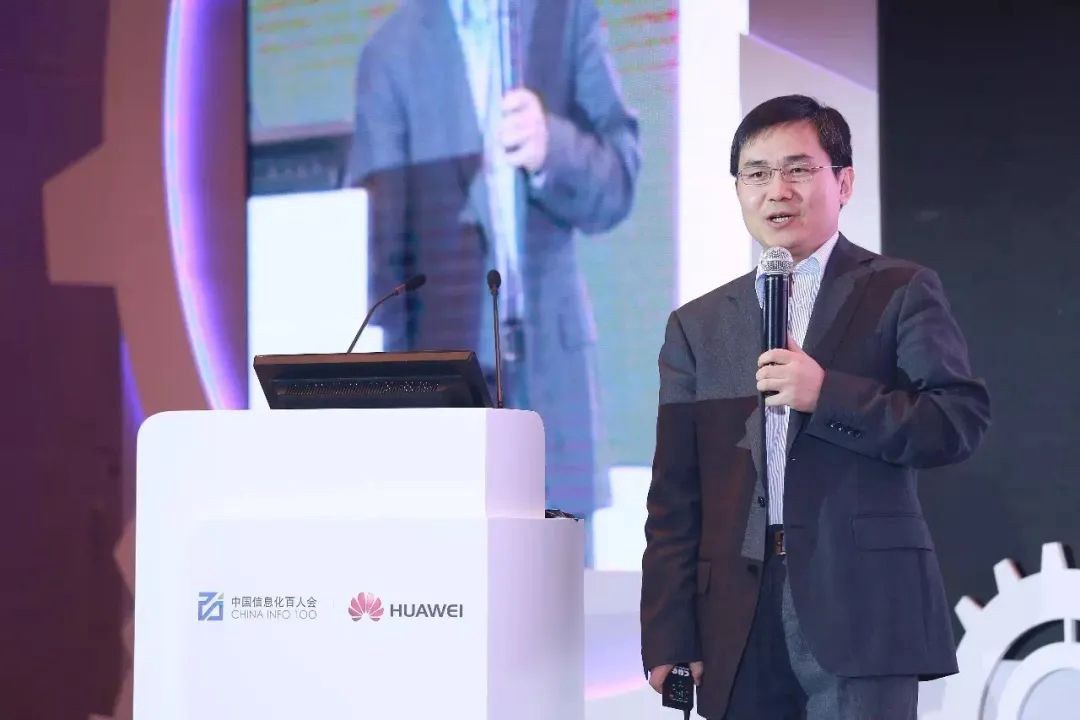 Xiaopeng An of Alibaba: in the future, two systems will coexist in this society, one is the physical world we see, and the other is the digital twin that we cannot see.

Xiaopeng An, the vice president of the Aliresearch, delivered a resounding speech at China’s Information Society 50 Forum. In the Digital Infrastructure: The Iron Foundation Leading to the Digital Twin, he stated that “from the perspective of infrastructure construction, digital technology is about deconstructing an old world and building a new one, a digital twin. The world of digital twins is to reconstruct the orbit of atoms in the ocean of bits. By mutual mapping, real-time interaction and efficient coordination between the physical world and its digital counterpart, digital twins build an operational framework of the material world in the vast sea of bits, a new system of the massive collaboration of human society. In this sense, digital infrastructure is the foundation of building the digital twin world.

New technologies are leading us to a brand new world and that will last for 20 to 30 years. The ultimate layout of a digital society is to construct a digital twin world in cyberspace that is ubiquitously connected to the physical space. It maps the real world with real-time linkage, accurate feedback, and systematic autonomy. With the booming of new technologies, methods and models, the interaction between the physical world and the digital world will evolve from static and dynamic to real-time, which will drive the digital twins of cyberspace to be infinitely close to the real space. Optimized resource allocation combined with both physical entity and digital twin will become the ultimate digital layout.

In the future, two systems will coexist in this society, one is the physical world we see, and the other is the digital twin that we cannot see, while digital infrastructure construction is to build a digital twin world that connects with the physical one, to serve the people better, for a better life.