How to Build a Digital Twin City in the Wave of New Infrastructure Construction? | 51SHARE 发布于2020-05-09

Editor’s note: digital twins come under the spotlight as new infrastructure construction deepens. New smart city, the main battleground of this strategic move of China, becomes one of the most important application scenes of digital twins.

The upsurge of attention will undoubtedly speed up the applications of digital twins to smart cities; however, overheating also impacts the market to a certain extent. The rush movement of the clients resulted from inadequate comprehension of the overall structure of digital twin cities often leads to repeated and inefficient construction, while the speculations spurred by insincere or inept suppliers in the wake of digital twins fever ultimately harm the users’ enthusiasm for new technologies.

Under the circumstances, we hope to contribute some rational analysis and overall thinking to the market. In this issue of 51SHARE, we invite Xiaolun Liu, 51WORLD products and solutions director, who is a seasoned and perceptive expert on the presentation and functions of digital twins in the terminal markets and superstructure construction, for his insight on digital twins in constructing the new smart city.

The real-time mapped model platform of city information is the core of digital twin city construction.

Originated in the high-end manufacturing companies, digital twin technology capitalizes on the data of physical models, sensors and operating history, integrates the simulation processes of multiple disciplines, physics, scales, and probabilities and completes the mapping in the virtual space to reflect the whole life cycle of the real counterpart.

The direct contact with the frontline market makes us realize that the vigorous construction of a fully perceptive and fully connected smart city system has ushered in a new round of digital twin exploration. In terms of policies, on April 10, China unveiled a plan on promoting the transformation of enterprises toward digitalization and intelligence by further expanding the application of cloud and data technologies. The plan, which was jointly released by the National Development and Reform Commission (NDRC) and the Cyberspace Administration of China, listed seven technologies such as digital twin, big data, AI, and 5G as common and key technologies in digital transformation.

One chapter was especially devoted to digital twin innovation projects, in which the government suggested to engage all parties to participate in the digital twin solutions. Shanghai municipality proposed to deploy common intelligent sensing devices in the construction of the IoT infrastructure to provide rudimentary public services while building a digital twin city base during the optimization and upgrading phase in the Lingang New Area of the Shanghai Free Trade Zone, according to telecommunications infrastructure guidelines for the area throughout 2025 released on April 20.

In recent years, driven by concepts such as “Digital China” and “Smart City”, digital twin cities construction has shifted from planning to scale implementation. Strategic areas across China, like Xiong’an New Area, Guiyang City, Chongqing City and Nanjing Jiangbei New Area, successively rolled out policies to assimilate digital twins in the top-level urban design, the tech of which was suggested to be built in as the core base for the intelligence center of a new smart city.

As practitioners, we are pleased to see that the scientific governance of national new areas, represented by Xiong’an New Area, has seen some achievements through simultaneous planning, construction and operation of the digital twin cities and their physical counterparts. 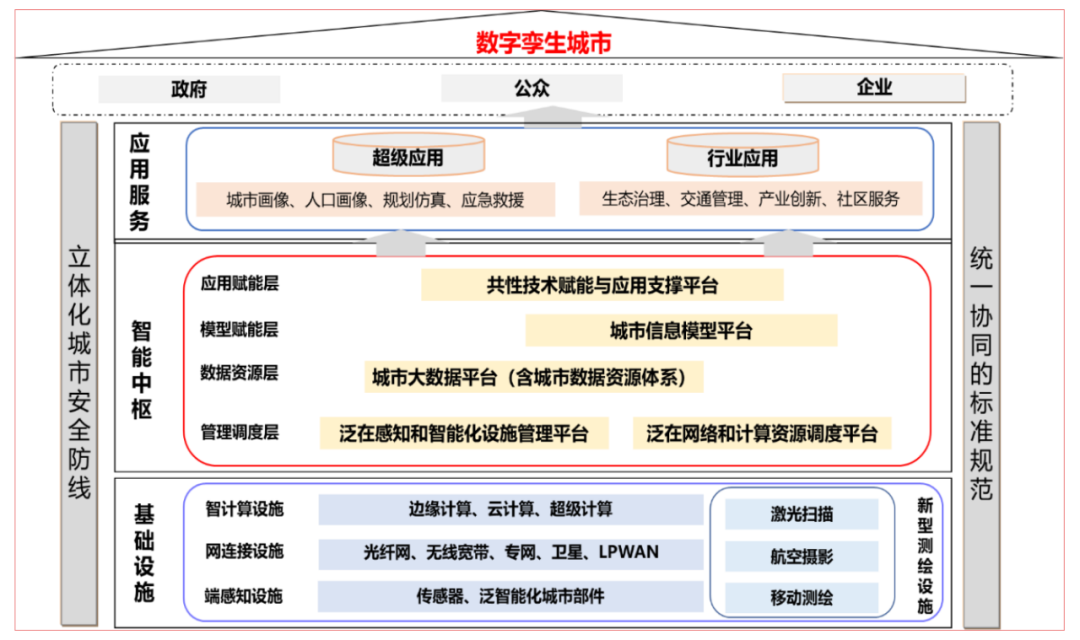 The CAICT specifies digital twin cities as new smart cities equipped with a set of technologies and applications in its overall layout. As can be seen, the digital twin cities consist of the new infrastructure, intelligent operation center, intelligent application system in the horizontal direction, and of urban security lines and standard specifications in the vertical direction. The new infrastructure includes Omni territorial awareness facilities (including pan-intelligent municipal facilities and urban components), network connectivity and intelligent computing devices.

The intelligent center is the concentration of the capabilities of a digital twin city, a city brain that builds the city’s digital base by managing the perceptive facilities and integrating big data and information models. It is the hub of accurate mapping and interaction between the virtual and the real.

Meanwhile, it delivers services of scenes, data and simulation through the common technologies enabling and application supporting platform. The applications of digital twin cities, equipped with the digital twin base and operation enabling platform, provide development and expansion capabilities for various government offices and vertical industries, such as parks, factories, ports and airports, as well as joint actions of emergency command and grid management to achieve 3D visualization, simulation, prediction and policy decision.

Judging from our practice in multiple smart city projects, the integration of multi-disciplinary technologies and multi-source data is pivotal for the success of digital twin cities. Some differences exist between a digital twin city and an intelligent city even the two share the same overall structure in general. First, a digital twin city extends and strengthens the technical applications such as 3D modeling and simulation of various elements of the urban space.

Second, the core platform enhances all-element digital expression, big data model drive and reverse intelligent control, and underlines a more integrated application system, highlighting the cross-domain and cross-sector application mode with a global perspective. On this basis, the twins of a digital city and a physical one achieve one-to-one mapping and interconnection.

The simulation of planning, building and running in a digital twin city makes for the best solutions for constructing a physical city. At the same time, the perception and feedback of real-time operation of the physical cities can be fully reflected in digital twin cities, forming a benign closed-loop of urban governance.

Part 2 The real-time mapped urban information model platform is the core of a digital twin city.

The interaction of a digital twin city with a real one needs an intuitive, efficient, and open platform. Therefore, we believe that the real-time mapped urban information model platform is the core of digital twin city construction, the comprehensive information carrier of depicting the details of the city, presenting the urban situation, and deducing the future trend. 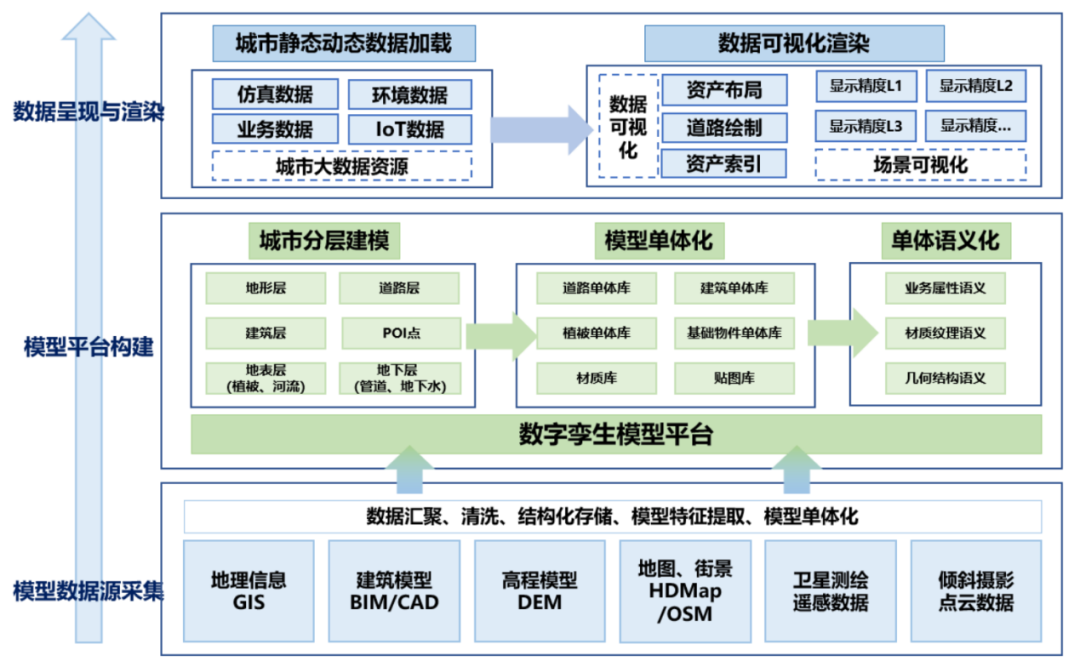 The whole picture and running status of the city presented by the city information model platform lay a strong foundation for data-driven governance. The platform incorporates the city big data and constructs a digital base of the city which is necessary for new smart cities.

At present, the digital twin city construction platform, represented by 51UrbanData, has evolved to mature applications which can be reflected in every dimension of the smart city operation.

The model platform integrates not only the static data but also various types of urban running data and IoT- aware data. In terms of simulating city operations, the platform deduces urban development trends with simulation and deep learning technologies.

As for real-time presentation, integrated with the operating data of smart terminals, the platform visualizes city running and dynamically warns of urban issues. Apart from these functions, the platform can rapidly simulate the results from the city managers’ decisions, on the basis of which select the optimal choice.

Digital twin technology has been widely recognized and valued by the smart city industry. In October 2019, the Research Report on Digital Twin Cities, an authoritative report led by China Academy of Information and Communication Technology (CAICT) that directly affiliated to the Ministry of Industry and Information Technology, was unveiled for the first time.

The report, jointly released by 51WORLD, Huawei, Alibaba and other institutions, introduced digital twin technology of the manufacturing industry into smart cities construction, made guidance for the architecture, key technologies and typical cases, and promoted cooperation with leading providers in relevant industries such as new mapping, urban modeling, data platform and industry applications.

We believe that constructing a new type of infrastructure is not starting from scratch, but is embedded in the process of smart city construction.

As part of the digitalized infrastructure, digital twins run through the construction of smart cities, meeting varied needs in applications of new area planning, urban construction, and city governance. It can preview and simulate the deployment of the information infrastructure as well as visualize aggregated data in real-time. In decision-making, digital twins support the integrated urban management system to make full use of the city’s massive underlying data, thus improving the management to a great extent. 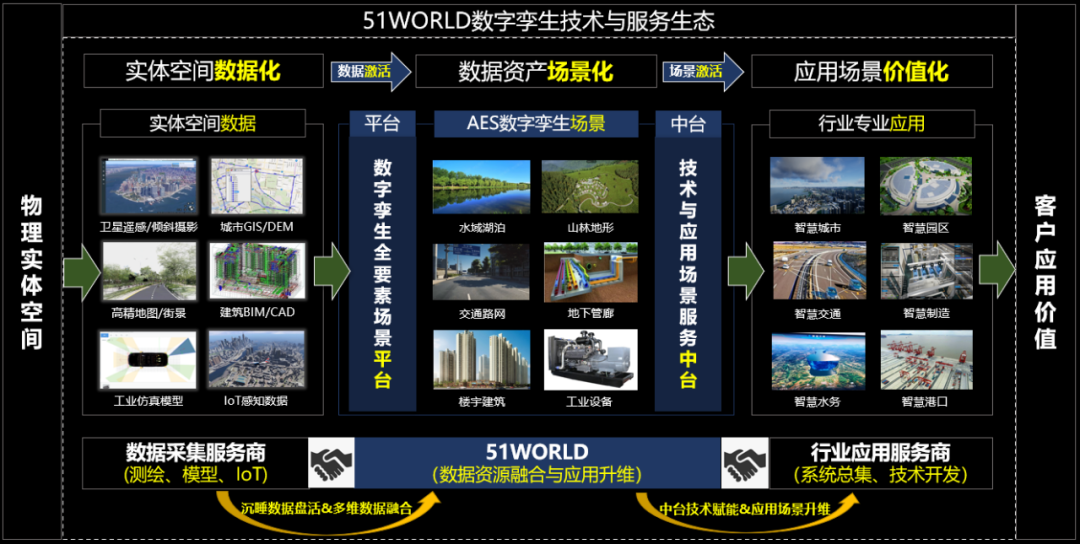 We see that digital twins are creating real values for smart cities. But there is still a long way to go. With the booming of digital twin technology, the foundation of new infrastructure must be consolidated to make the city really smart.