At night, the grand and brightly-lit digital twin airport is hustling and bustling with planes and ground vehicles. On each route, the wing status of the aircraft, whether the landing gear is opened, the plane’s speed, altitude, latitude, and longitude are synchronized in real-time, presenting a lively picture of the whole airspace.

Sounds like an aviation simulation game? It is materialized in the cloud mirror system developed by 51WORLD and China Academy of Civil Aviation Science and Technology. Unlike the game, the digital twin airport has access to the real-time data of aviation, terminals, and ground operations, achieving “what you see is what you get”, which helps to improve operational efficiency and reduce management costs to a great extent.

The sudden outbreak of the new coronavirus has made the global civil aviation industry suffer from a cold winter that has not been seen in decades.

The Airports Council International said in a report that the pandemic would reduce global passengers by two-fifths in 2020, while the airport’s revenue would be slashed by approximately 50 percent and the total loss would exceed $76 billion. Global carriers are also expected to undergo a 44 percent year-on-year decline in passenger revenue this year.

Therefore, it is imperative to use digital twin, big data, cloud computing, artificial intelligence and other technological means to elevate the efficiency of the operation and management of the shipping hub. Meanwhile, as a crucial component of traditional infrastructure, the airport plays a significant role in safeguarding the livelihood of the community and guaranteeing economic development.

▲Aircraft take-off and land in real-time

In January, the Civil Aviation Administration issued an action plan for China’s airport construction, in which it put forward to build safe, green, intelligent, and humane airports by 2035 by means of intelligent measures. 2020 marks the beginning of the construction and the Civil Aviation Administration has established 23 demonstration projects of smart airport construction in Beijing, Guangzhou, and Shenzhen. Despite strong support from the civil aviation authorities, technically, it is not easy to upgrade the traditional airports to the digital twin level.

First of all, it is extremely difficult to integrate diverse systems since an air transport hub needs a variety of complex systems such as scene surveillance radar, airport panoramic monitoring, airport collaborative decision-making (A-CDM), delay information release, air traffic control coordination, meteorological observation and intelligent building management system (IBMS), to get the goings of an aircraft, the airspace, the situation on the ground as well as passengers flow of the public transport.

Finally, the chronic issues of inadequate data space attributes, fragmented scenes, and unintuitive interactive interfaces existing in the traditional airport management system itself are also the hurdles to overcome in the new airport construction.

To build digital twin airports with a unified scale, caliber and interface

To cope with these problems mentioned above, 51WORLD and the China Academy of Civil Aviation Science and Technology jointly created a digital twin airport system- the cloud mirror system. At present, the system has been landed at some airport in the north. Compared with the traditional flat data center, the “cloud mirror” can map and feedback the aircraft’s take-offs and landings, cruise status as well as apron safety monitoring in space coordinates, attribute real geographic space coordinates to vehicles and aircraft, open up data isolations, and improve the effect and efficiency of information management.

The unified scale attributed a uniform, an identical coordinate system to the airport’s objects, data and information flow to clarify the location and status of objects such as aircraft, ground vehicles, IoT terminals, passengers, and staff.

After integrating the spatial data of BIM, 3DMAX, CAD and GIS, 51WORLD and the team of China Academy of Civil Aviation Science and Technology mapped and connected the real geographic information coordinate system, quickly generate the airspace and city floor of hundreds of square kilometers of L2-L3, terminal buildings and apron road lines of L3 with 51Urbandata, thus constructing a digital twin base and laying a foundation for further comprehensive management. 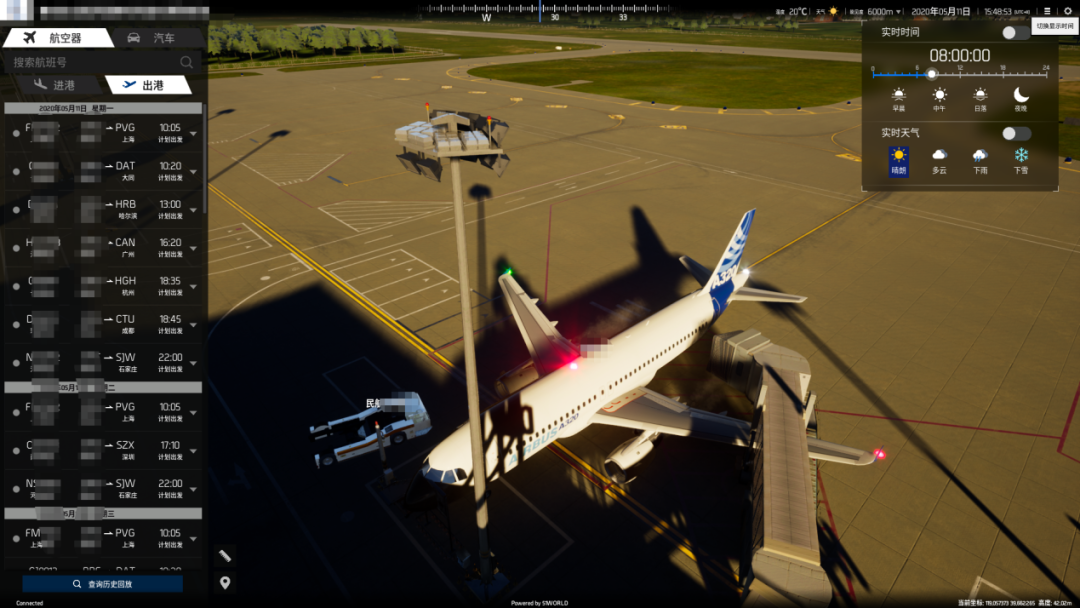 Both teams preset management objects such as aircraft and ground vehicles that could be driven by real-world operating data with independent semantics, which could be managed individually or jointly to form the object of a dynamic digital twin.

For example, the operators could learn, in real-time, the current or past working status of the digital twins of ground-based operating vehicles such as bird-repellent vehicles, ferries, tractors, snow-sweepers, weeding vehicles, etc. with the data of their positions, speeds, and turning angles. In the event of an incident, the operator could check it back immediately. 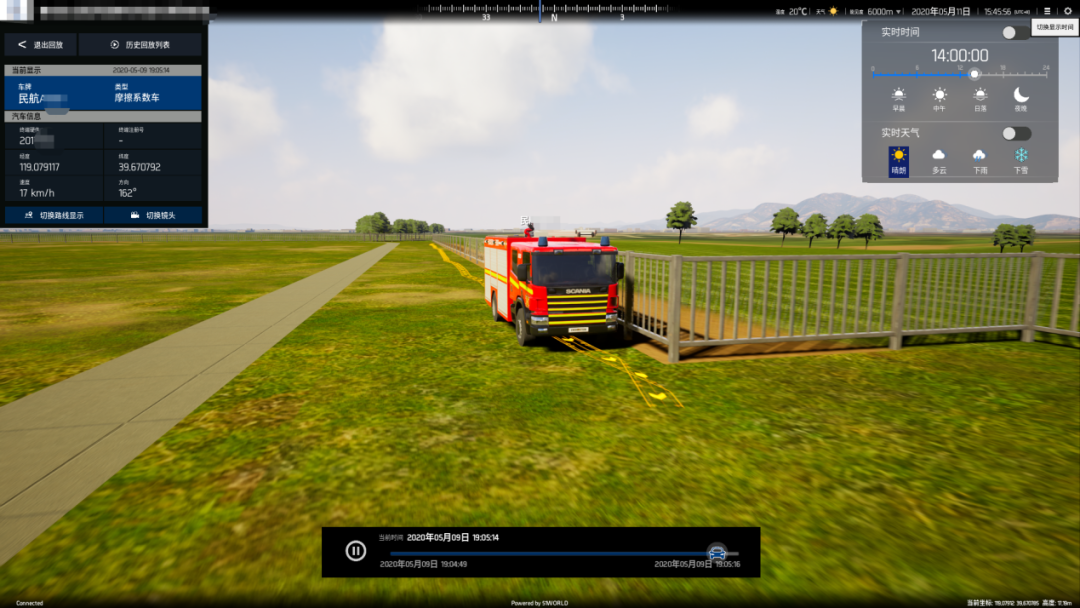 The unified interface empowered the system to manage the airport with one single screen by means of information integration, SOA, and SSO. At the same time, it was capable of allocating corresponding operating and data permissions for different personnel, posts and users according to the regulations, to ensure that the rules were strictly implemented and the personnel coordinated freely. When the scenes of the aprons and terminals ere highly accurate, services such as pedestrian thermals, vehicle dynamics, V2X simulation, driverless training, and traffic flow simulation could be introduced to preview the emergency management and airport construction scheme in the digital twin airport interface, providing the managers with an intuitive decision-making basis. It was worth noting that, via 51WORLD cloud rendering technology, workers could get the same operating experience and visual effects in the mobile applications as in the mainframe, and reversely control airport equipment to ensure high utilization of the system.

Digital Twin Airports: addressing the issues of the present and being future-oriented 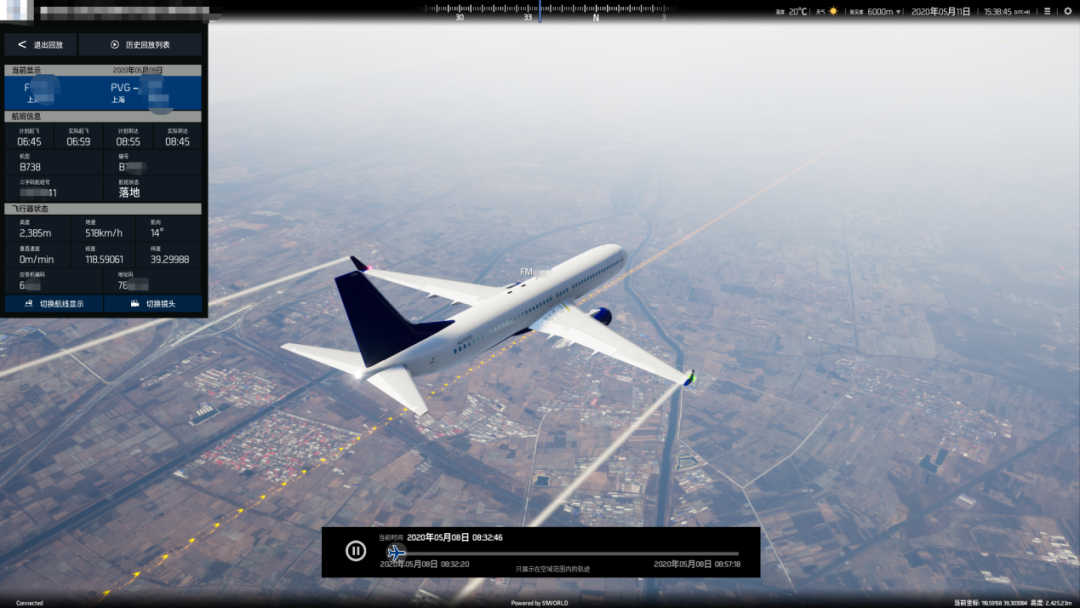 In measuring how busy a route was, the system could generate a thermodynamic chart of each route by analyzing the time occupancy ratios, and present the monitoring results via the voxel grid after superimposing all the charts of the routes. In traditional large-screen mode, the results were often carried on multiple interfaces and presented in three views respectively, which could be converted into readable information only after the interpretation and recognition of a professional.

On the contrary, in the cloud mirror system, an operator could easily arrange the flights and the routes within one interface. In terms of ground operations, as 51WORLD incorporated the surveillance video into the digital twin, combining the various sensors deployed in the airport perimeter, the system was able to issue warnings on unusual behaviors such as intrusion, unauthorized operation, speeding, and overtime working, thus safeguarding the operations on the ground.

The interface of ground vehicles management

As the accuracy of the digital twin airport improves in the future, the system can also calculate the blind areas and visual fields of monitoring, analyze the distribution of security, and help the managers to draw up proactive security strategy. In terms of the terminals, functions such as public transportation, building management, and visitor services could be loaded to connect with digital twin park solutions. At the same time, in line with national new infrastructure construction and to build a safe, green, intelligent and humane airport, the cloud mirror system also added in V2X communication, laser/mm-wave/ vision, vehicle dynamics, unmanned training set, advanced process simulation (APS) connecting capabilities. In the near future, the digital twins of unmanned shuttle buses and unmanned logistics vehicles can be realized on the same platform, which is convenient for the airport to expand related services.

As the transportation hub of a city, an airport is a gateway and window for the city to demonstrate its achievements in smart construction, and a safe, green, intelligent, and humane airport speaks volumes for the city.

The intelligent infrastructure and the traditional infrastructure are both indispensable for constructing a safe, green, intelligent, and humane airport while the digital twin technology is the bridge between the two, according to Zhang Kunqi, the manager of 51WORLD Pre-Sales Program and Ecological Partnership Department participating in the project.

The business capabilities and technical strengths of the China Academy of Civil Aviation Science and Technology and 51WORLD were highly valued by each other. The success of this project couldn’t be separated from the professional advice and decades’ accumulation of the Academy in civil aviation safety, operation and development while 51WORLD delivered leading digital twin products and services.

In the future, 51WORLD and the Academy will continue to work together in constructing safe, green, intelligent, and humane airports to help the long-term and healthy development of China’s civil aviation industry.