June 7 marked the official completion of the smart city command center of the CBD in Jiangbei New Area. 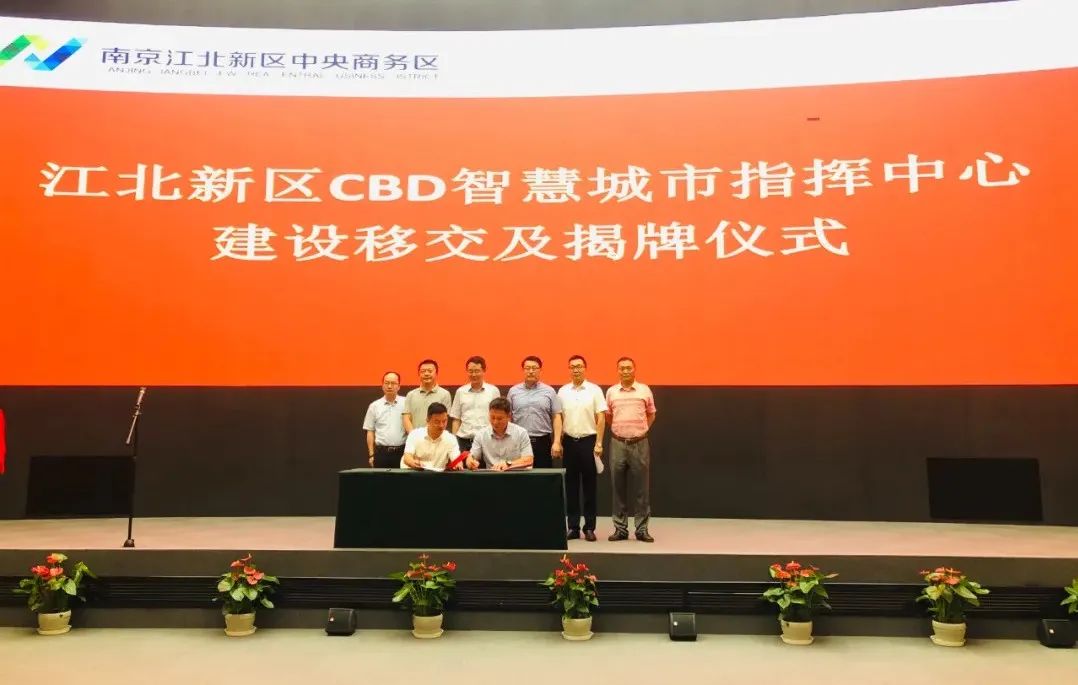 The system, co-developed by 51WORLD and Nanjing Unicom, portrayed the landscape, presented the trend, and deduced the future of the area with the most advanced digital twin technology in China. Equipped with various sensors and incorporated with the 5G network, NB-IoT, BIM, and AI, the digital twin CBD was able to achieve global awareness, data sharing, cross command, and accurate feedback.

At the handover ceremony, Wang Dongning, the CBD office director, said that the construction of the CBD smart city manifested the CBD had always attached great importance to high techs, and he emphasized that in the future, information integration technology should be assimilated into the technical means, working methods and achievements presentation.

Wang Dongning further pointed out that the smart city command center was a bold venture into the combination of information technology, computer system, decision-making system, and visual image processing technology.

As one of the 19 state-level new areas approved by the State Council and the only one in Jiangsu Province, Nanjing Jiangbei New Area strategically positions itself as the pilot area of innovation, the demonstration area for new-type urbanization, the hub for modern industries in the Yangtze River Delta region and the major platform for opening-up and cooperation in Yangtze River Economic Belt.

According to a 2019 district guideline on smart city construction, Nanjing Jiangbei New Area aspired to construct itself as the first digital twin city in China by 2025, promoting the virtualization of city elements, real-time urban operation and coordinated smart governance with digital twin technology.

Against this backdrop, a smart city command center with the major functions of smart construction, intelligent governance and enterprise service came into being. Utilizing 51UrbanData digital backplane construction technology, 51WORLD restored the large scenes of the 25.4 square kilometers of the CBD and meticulously presented core areas such as the Health Center and Qinglong Green Belt and major transportation hubs such as the Dingshan overpass and Jiangbei Avenue Expressway. Overlaid with the dynamic traffic flow, the digital twin CBD represented a lively picture of its real-world counterpart.

As Nanjing aims to build another city center around the CBD, a large number of high-standard projects have sprung up in recent years. In order to better manage urban construction, the smart city system accurately presented the qualities and progress of the projects in real-time.

A global view of the large scenes of the 25.4 square kilometers in the CBD was generated in the digital twin scenario. As for a specific area, viewers could see corresponding information such as functional area planning, land planning, municipal infrastructure construction, and project progress, with urban planning legends indicating different natures of land utilization.

The system displayed the details of the key projects with data panels, including construction and management information, progress warning, equipment access on the site, etc.

In terms of progress management, it adopted the BIM model to visually show the progress of the project and distinguish between the undone and the completed, presenting an unobstructed picture of progress status and providing a comparison of the planned and actual progress.

▲BIM model for projects under construction

5G-supported UAVs, a feature of the smart city construction, could patrol specific lines and respond to emergencies. As the eye of the sky in the CBD, the drones were able to observe the traffic conditions on the ground, take photos and videos of emergencies, monitor the construction at any time, distinguish the cover situation of the naked soil, and identify illegal construction.

Smart governance consisted of city management, urban security, and environmental protection. Equipped with terminal IoT sensors or other data devices, the system generated relevant warnings after background judgment, which were incorporated into the digital twin backplane for presentation.

In terms of urban management, the system had designed down-to-earth functions such as city environment supervision, dirt trucks regulation and parking control. Similar consideration was also given to modules of urban security and environmental protection. 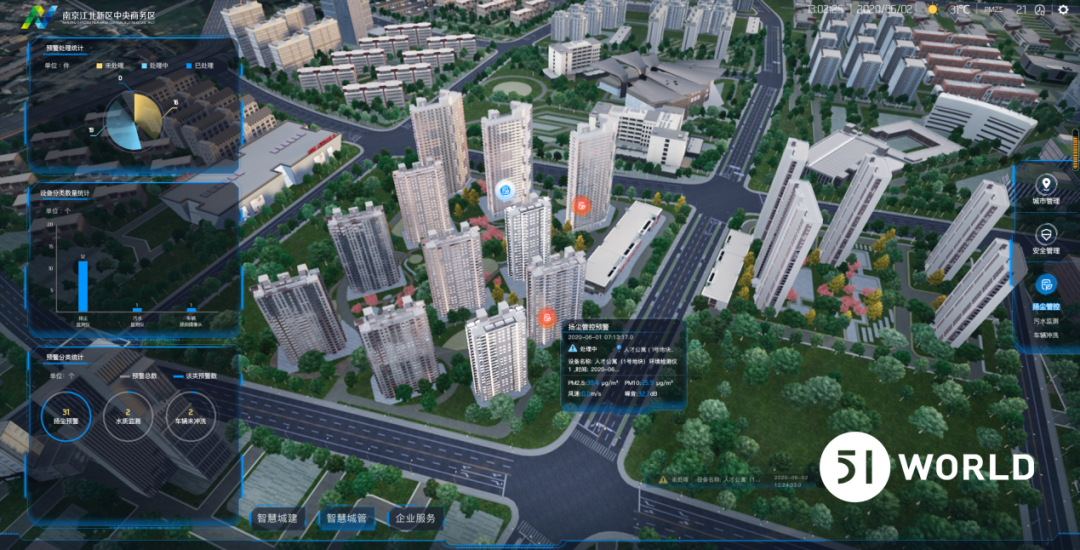 Taking dust control as an example, the viewer could check the index in real-time and the system would issue an alarm if anything unusual happened. Then the managers were notified to deal with the event, achieving the closed-loop of processing.

“Each function is then modified demand of the team and the CBD office after repeated investigation, research, and communication. In this process, the CBD office gets more and more expectant of the smart city system while the system itself becomes increasingly perfect and down to earth,” commented Zheng Yingya of the 51WORLD Digital City Division.

Nanjing Jiangbei New Area has previously proposed to deliver the best service and build the most intelligent city by 2021. Wang Dongning, the CBD office director, pointed out that there were three hurdles to overcome for the future development of the smart city system.

First, how to make the system play a greater role on the basis of existing functions, to better fit the regional development of the CBD in scope as well as in-depth;

Second, how to wisely combine technology with management, organization, and processing procedures;

Third, how to engage more people, institutions, and enterprises into building the intelligent city system.

In the future, 51WORLD will maintain close cooperation with Nanjing Unicom to continuously provide top-notch digital twin service for the smart city system of the CBD in Jiangbei New Area, and, with its original technology, make a contribution to modernizing and transforming Jiangbei New Area.