More than 70 % of the surface of this blue planet we live on is covered by water. For 51WORLD, to make a digital twin of the water is an important step towards cloning the earth.

Generally, China’s water resources are insufficient and they vary greatly in different regions and seasons. Therefore, it is imperative for us to ensure the safety of people’s lives and property in the event of floods, to utilize water resources efficiently, and to protect the water environment effectively.

To simulate water bodies is extremely difficult as it often involves processing massive data and entails a complex governance system that affects each other. The technical bottleneck of incorporating watersheds, rivers, lakes, and reservoir pipelines into one scene and the lack of digital twin models further compound the simulation.

Since last year, with the support of all-element scenarios and cooperated with leading partners in water services, 51WORLD has gone deep into the information technology, bringing new ideas and new technologies to the industry.

51WORLD believes that the natural waters and urban pipeline networks will be manageable in the same scene, multi-source data will be visualized and replicated in digital twin scenarios, which helps the personnel respond quickly and makes the public better understand the water industry.

Therefore, 51WORLD has launched the digital twin industry line of major application scenarios such as urban water supply, flood defense, drought relief, and ecological governance, which has been landed in a number of provinces and cities at home and abroad.

Clear waters and green mountains are as good as mountains of gold and silver. As water protection has become a manifesto of the Chinese government, 51WORLD makes a digital twin of the watersheds, rivers and water bodies in the natural ecology, and provides targeted solutions for ecological management, pollution sources control, indicators monitoring and flood defense.

Among them, the “Three Smart Lakes” of Yunnan Province, 51WORLD’s major industry project in the field of water environmental protection, enables the administrators to deduce the water quality to observe the distribution of pollutants in the lake over a period of time and displays the tributaries impacting the lake’s mid-point water quality to trace the pollutants.

Three Smart Lakes is a key project under the direction of the Fuxian Lake Administration of Yuxi City and guided by Yunnan Provincial Committee. It is an implementation of the action plan of strengthening ecological environment protection by the Yunnan Province and a concrete measure of protecting the nine lakes on the plateau.

▲The rise of the lake model

The system loaded the water quality data collected by the sensors deployed in the lake and visualized them with different shades of colors according to the degree of water pollution. At the same time, the system demonstrated the changes in water quality in a given period with the analyzed results over time displaying on both sides of the panels.

Water volume is one of the key indicators of monitoring the water. The digital twin “Three Smart Lakes” could detect and track the flows and volumes of the lake and its tributaries, displaying the whole process and elements of water resources utilization. In addition to replicating the present, the system was able to predict to some extent.

Equipped with the water model algorithm and combined with the visual scenes, 51WORLD could predict the changes of water volumes, the evolution of water pollution and environment protection tendencies, enabling the managers to watch the predicted results in person.

Ecological law enforcement is another daily task of the water management department. By accessing the cameras, the intelligent law enforcement module of the system connected the virtual scenes with the real scenes in order to monitor the later in real-time.

As for the UAVs and unmanned ships, the system mapped out real-time patrol routes in the digital twin scenes of the lakes and realistically represented the law enforcement process from a third perspective, thus helping reasonable allocation of the task forces and ensuring water safety and ecological stability.

Intelligent law enforcement simulation Similar to the “Three Smart Lakes”, other intelligent water projects can realize the rapid embedding and two-way interaction of all-element 3D scenes on the webpage by accessing the third-party Web of 51WORLD SuperAPI, to flexibly get the eco-environmental protection data of the administration bureau for the system’s subsequent development and data update.

Water supply and drainage systems are indispensable for urban planning. Relying on its cutting-edge digital twin capability, 51WORLD replicates urban water supply and drainage networks, sewage treatment plants, and the distribution of rivers and lakes in the 3D scenes of urban construction, providing the basis for making relevant decisions. 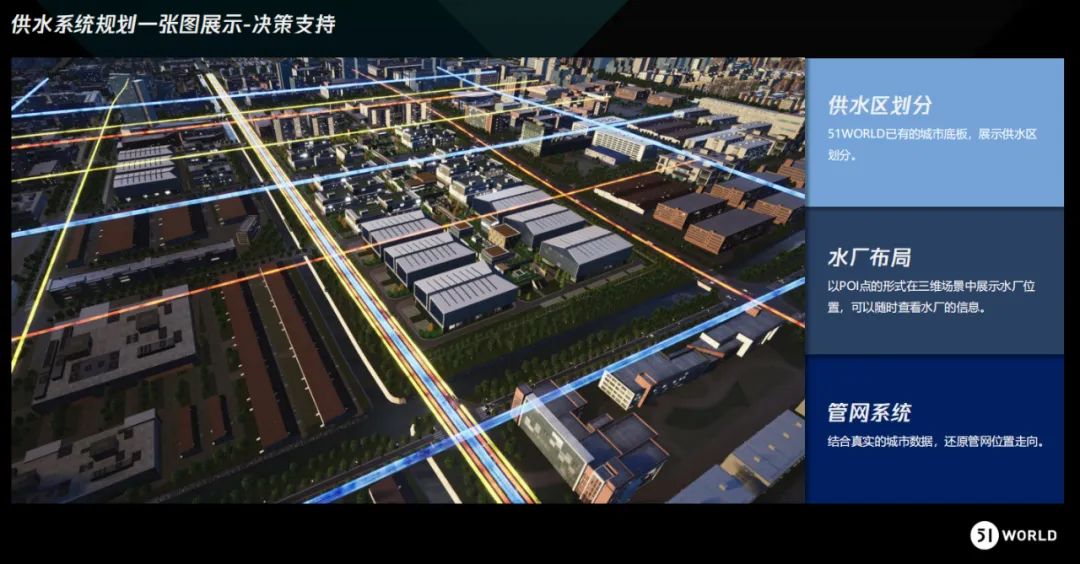 ▲A planning map of the water supply system

Apart from replicating the scenes, the digital twin can display the locations of water plants in 3D scenes in the form of POI, and get access to crucial water quality indicators such as the color, turbidity, residual chlorine, chemical oxygen demand, total bacteria, total coliforms, heat-resistant coliforms, etc., to ensure the security of urban water supply.

At the same time, real-time video information such as UAVs patrolling and fixed-point cameras in key areas of water sources can also be connected to the digital twin system, to identify emergencies such as intrusion and water pollution. As flood defense is closely related to the lives and properties of the people, it charts the course of digital twin water applications. At present, 51WORLD is able to provide emergency demonstrations, real-time surveillance in flood-prone areas, and evacuation in disaster-stricken regions.

These features have been well received by customers overseas. In the Singapore Smart City Management System, a digital twin built for Singapore’s top developer Surbana Jurong and the Singaporean Government, 51WORLD replicated the scenes of the whole nation, in which it deduced different scopes of the inundated urban areas according to different scales of floods and visualized them in 3D, providing assistance for decision-makers in fighting against the floods.

03 The advent of the digital twin water industry

In terms of technologies, The Internet of Things, big data and cloud computing are gradually being assimilated into the water conservancy industry, promoting the construction of China’s command system of flood and drought defense, and the establishment of the backbone networks across China while the intelligent models have been operated in major projects such as flood forecasting and cross-region water diversion.

In addition, geographic information, water networks and water conservancy projects are incorporated into one scene since numerous water monitoring terminals have collected massive relevant data. In short, the improvement of the IoT devices and water information networks has laid the foundation for applying digital twin in the water industry.

As for governmental funds, the state is encouraging more investment into water informationization. In 2017, the total amount of China’s investment in water conservancy information technologies reached about 21.29 billion yuan while in 2018, the number came up to 24.05 billion yuan. Research institute predicted that it would grow at a CAGR of around 12% from 2018 to 2023.

On the other hand, investment in water ecological management went up year by year. The State Council issued an Action Plan for the Prevention and Control of Water Pollution in 2015, in which it expected that about 4 to 5 trillion yuan were needed by 2020 to achieve corresponding targets, of which the local governments were required to contribute about 1.5 trillion yuan. In terms of demands, more than 1.2 million river chiefs and rangers have been installed across China as a strategic measure to reform the ecological system and build a beautiful China.

It is a market of huge potentials and it is promising to carry out water management efficiency in the digital twin scenarios. In addition, the public becomes increasingly concerned about water quality, urban drainage, the treatment of polluted waters and ecological protection. It is also necessary for water administrators to respond to public concerns in a digital way. All these have contributed to pushing 51WORLD to further promote the digital twin industry line of the water businesses.

Relying on its original digital twin technology, 51WORLD will continue to forge in-depth cooperation with industry partners and put forward more effective and down-to-earth water solutions, to build a smart bridge between “clear waters and green mountains” and “mountains of gold and silver”.